News: Are tummies the new cleavage? 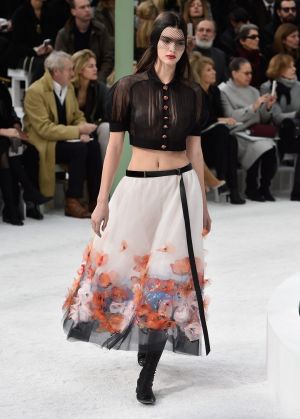 Kendell Jenner at the Chanel Show

According to Karl Lagerfeld, head designer and fashion guru at Chanel,  tummies are the new cleavage on the runway.  This move might take us back to the 1980’s fashion when the bare midriff, as epitomised by Madonna, was all the rage.  (Yes, we 80s girls did follow the trend…did I just reveal my age?!)  Except, big hair and shoulder pads…no.  Thank goodness, they have not been brought back because my eyes would hurt seeing it on the street again.

It was an easy look for the nymph-like models to carry off. But for Chanel customers some serious abdominal work will be in order, as Lagerfeld himself admitted after the show.

“The new cleavage is the stomach,” he said.

“The upper part” – he said, describing with his half-gloved hands a bosom far more generous than those on the waifish models – “everybody did it.

“Now we go a bit lower, and it (the stomach) is even more difficult to keep in shape.”

The Chanel show, which was held in the glass-roofed Grand Palais, starred model of the moment Kendall Jenner and attracted a number of international celebrities.

Fitness is clearly on the agenda for us mere mortals (aka non-models) and has been for some time now.   So let’s see what becomes of it and whether tummy surgical and non-surgical procedures will start taking over Australia’s no.1 most popular cosmetic procedure, breast augmentation.  Perhaps the intrigue lies in that this area, as Mr Lagerfeld put it, is much more difficult to attain.  Time will tell whether in 2015 tummy procedures will be on the rise, with them already pretty much on par with breast augmentation in our practice (either as a single cosmetic procedure or double procedures such as with mummy makeovers).

Tell us what you think in the comments below : Are tummies more provocative than cleavage in 2015?

Remember to feel free to share, sharing is caring as they say!